You have your next series coming out as well.
Yes, my next series is set in France. I was going to extend this trip and go to the south of France to do research. But now I’m going to go on a separate trip. I just have to eat French pastries and go shopping. It’s a tough life *laugh* but someone’s got to do it.

Your next series is going to be more Gothic like your first series, is that your comfort zone?
I think it’s Gothic, but it’s also set in the modern world. The first books were dripping with Gothic, but this one is more, you know there are gargoyles. It’s a little of the atmosphere, but not like the genre. The idea did come from The Mad Man’s Daughter, which is about humans who are creating other humanoid things out animals. About the morality of that. I think that I just wanted to revisit some of those themes, but from the perspective of the creations. Instead of thinking about the scientists in this book, it’s magic not science, it’s these fairy-tale creatures that were mice and cats and its them struggling because the really want to stay human and what does that mean. It’s a different side of the the same themes. It’s been really fun to write. It’s a little bit lighter in tone, because there’s lots of pastries. It’s due May first, so I’m just putting the finishing touches on it. I love it, I feel like I’ve learned so much from the other books that it just flows in a really nice way.

You grew up in a bookstore. How was that?
It really both made me into an author, but then it also kept me from writing for a long time. I always loved books, we were always surrounded in them. After school I would always go to the bookstore and read or work. And at home we just had books lining the shelves too. But It kind of prevented me from being a writer because this was how we made our money. We sold books. So to me they were always a product and they were also an art. As a reader I loved them but I just never saw them as something that a regular person could create. It just took me a really long time to get out of the mindset from selling books into producing books. But then when I did make that switch of having read that much, of having grown up with parents that promoted reading so much, helped me immensely. Also to understand, what do readers want, what do customers want. From a practical standpoint of having worked in a bookstore for so long, and knowing what sells and what doesn’t, is very eye opening. Sometimes scary to know what people really like. I found that to be helpful too. It was just like a paradise for a kid.

I keep wanting to write a book for middle-grade kids about someone who grows up in a bookstore. I tried, it hasn’t clicked yet. It just meant so much for me. It’s such a special world, there’s so much magic in books and a whole bookstore full of them. Some day.

Which book would you be able to read for an infinite amount of times, without ever getting bored of it?
I think, two jump to mind. It has to be a book that has a really rich world that you feel like you could just stay in forever. One of the most beautifully atmospheric books is The Night Circus by Erin Morgenstern. The circus world is so provocative. In the circus there’s all the different tents and very dreamy with the magic and competition. That one maybe. The other one is probably The Hunger Games. I love that book so much. It’s very popular, but for a very good reason. I just think that world is so interesting too, it’s entertaining but then it’s also really insightful about our world, the way our world might be headed.

Would your rather be able to read every single book out there, but not read the ending, or read one book for the rest of your life?
Oh my gosh. I think I’ll take every book without the ending, which is torturous, you’ve got a twisted mind. But then I could at least invent my own ending. I don’t often reread books, I really like to try new books. We’ll give that a try, but that’s torture.

Is there a place you would love to go to? Both fictional and real.
Fictional I’d say Hogwarts. Real place I think New Zealand, I loved Lord of the Rings, so I’d love to visit some of the places. There’s this one place in Tanzania I’ve always wanted to go Giraffe manor. It’s a giraffe preserve and there’s this old colonial house that’s been turned in like a B&B. There’s no glass in front of the windows, so the giraffes just stick their heads in. It just seems magical and I’ve always been an animal lover, so that’s always been on my list.

If you could have one magical power or item what would it be? and why?
How about to be able to write the most magically fantastic book that the world has ever seen. Or the ability to transport into any book world. 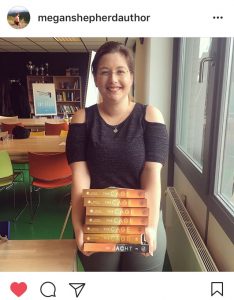 At the end she was happy to sign a couple of books.

It was amazing to interview her, she is such a lovely person. Thank you Megan for letting us interview you and thank you YALFest for the opportunity.

What do you think of her?