How did you come up with the story for The Cage?
That’s an interesting story. I was at a writers retreat and one of the author’s husband is a zoologist, and she was telling us about some of the bizarre things that happen in zoos. We were all drinking a lot of wine too. I started to think, some of those stories are really morally ambiguous and I was thinking what if we were the one behind bars. What would that be like. And of course with another species as our zookeeper and how would we react to that situation.

I always loved the show The Twilight Zone and there is an episode that is like that. The idea of being constantly watched, it just plays into. That night I wrote it up and sent it to my agent and said: What if it’s a human zoo? Is that totally crazy? He said: Yes, but go with it. Do it!

Did it take you a long while to get the first draft out?
I wrote the first draft of The Cage very quickly. within weeks. then it took me 2 years to edit. I feel like it either takes me 1,5 years to write a book and then edit very quickly, or I write it very quickly and then edits take forever. So it’s always between a year and two years. My editor and I probably went through ten revisions. Largely because of the world building issues, and because it’s told from 6 different characters perspectives. So really trying to fine tune those characters, creating the right balance, that took a lot of time.

Was it the plan from the beginning to write from 6 different characters?
No, the first draft was just from Cora’s perspective, and in the first draft her backstory was much stranger and expanded and played more into the future. For different reasons it really just wasn’t working. So we decided to simplify her backstory just a bit and then I felt that the story needed a little more character building. Instead of focusing on her, I decided to bring in the other characters. I was really happy about it, even though it was a lot of work. To keep track of everything and to have everyone’s stories chronologically balanced is a puzzle. But I really love that kind of thing, the puzzle of having the plot fit together. That’s part of the fun part of writing for me.

Did it feel different for the second and the third book?
Yes it did, it was because I knew the characters at this point. I spend so much time in The Cage understanding the characters and the world building that for the second part I felt more comfortable with that. So I could enjoy just the process of creating the storyboard and throw in more bizarre stuff. I also let myself go. For the first book, you know, it’s a human-zoo and then the second book is sort of a human safari and then the third book is a human rat-race. I just said to myself, you know screw it, let’s go big, let’s go weird. I just let myself have fun with it and play with different tropes and just let the world kind of blow up. It was just fun.

Can you tell us a little bit what to expect for the third book?
Sort of a rat-race yeah. I had this idea that each book would take a different spin on how humans treat animals, with the kindred treating humans that way. The third book get’s more into the experimentation. I had the idea that we would kind of be like lab rats. Very loosely. The Gauntlet is to test for a species intelligence and if they deserve to be able to govern themselves. The race itself involves puzzles and lots of challenges. Sort of like we would do for a chimpanzee. There are twelve different puzzles and it’s twisted and it’s never what you expect.

The Gauntlet is my favorite of the books. Just because it’s so twisted and weird. There are lots of revelations about the characters and even things about the kindred that they don’t even know about themselves. All of the secrets are on the table. 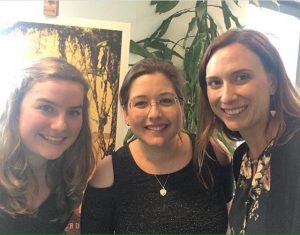 Which one of the characters surprised you the most?
I think Leon, he’s the New Zealand Maori guy. His voice, I just loved writing him. I knew I wanted a character like him in the book, but he came to life for me in a way that was much beyond what I had planned for him to be. He has a lot of character change. Everyone sees him as the sort of physical stereotype. He’s so interested in morality, art and love, and as the story goes on there’s some really sweet romance with him. His romantic partner Molly, surprised me a lot too. I knew I wanted a character that had grown up more among the aliens, and I just liked her perspective of the human characters. How she saw the other characters helped me understand them as well from kind of an outsiders perspective.

Who of the boys is your true match?
I guess I would say Lucky. Leon is really cute, but.. Oh I forgot Cassian, maybe Cassian. I like Lucky’s heart. He’s someone I could deeply connect to in real life. And he plays guitar.

How did it feel wrapping up your second series?
Pretty surreal. I just can’t believe I have these 6 books out and I have one for younger children as well. My first book came out in 2013, I feel like that was not that long ago. I just feel so incredibly lucky that I have been able to do this. I was a daydreamer when I was a teenager. and I never thought that could be a career. My parents always pushed me, realistically, to pursue another career. That’s what I did for a long time, but it just didn’t feel right. So then I decided, I’m really going to be a writer. It’s part of the daydreaming. that’s what I really get to do, I get to come up with these worlds and these characters. Especially the two series having 3 whole books to explore the world and the characters is just amazing. You just get so much deeper, you get to know things about the characters you don’t even know when you start out. It just makes me feel proud and makes me feel like I really owe it to these characters to tell a good story. I owe it to the readers. I’m just so thrilled and (knock on wood) that I can keep writing for many years.

Have you read The Cage series yet? If so, what did you think?