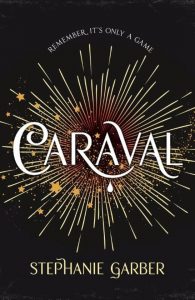 As I mentioned in the previous post, I won an ARC of Caraval at YALC last summer with my friend. It still took me a while to start in the book. Not because I didn’t want to, but because I couldn’t get to it. Two weeks ago I got a final copy in the mail. It is super beautiful! I got the one with a clock on it and I’m really happy. Thank you Hoddor & Stoughton.

Scarlett has never left the tiny island where she and her beloved sister, Tella, live with their powerful, and cruel, father. Now Scarlett’s father has arranged a marriage for her, and Scarlett thinks her dreams of seeing Caraval, the far-away, once-a-year performance where the audience participates in the show, are over.

But this year, Scarlett’s long-dreamt of invitation finally arrives. With the help of a mysterious sailor, Tella whisks Scarlett away to the show. Only, as soon as they arrive, Tella is kidnapped by Caraval’s mastermind organizer, Legend. It turns out that this season’s Caraval revolves around Tella, and whoever finds her first is the winner.

Scarlett has been told that everything that happens during Caraval is only an elaborate performance. But she nevertheless becomes enmeshed in a game of love, heartbreak, and magic with the other players in the game. And whether Caraval is real or not, she must find Tella before the five nights of the game are over, a dangerous domino effect of consequences is set off, and her sister disappears forever.

After I started reading Caraval I couldn’t put it down. I continuously switched between my physical copy and the audiobook so that I could continue on the way to school or placement (the tube during rush hour is no the best place to read a book). Invention of the century these audiobooks.

I didn’t expect to like this book so much. Don’t get me wrong the blurb sounded intriguing, but normally I’m not really a fan of carnival stories. It takes too long for me to be swooped up in the story. I couldn’t finish Night Circus for instance. But with Caraval there is something there that just stays in my mind. Perhaps it’s the magic of the game, or the question of who speaks the truth and who doesn’t. Or perhaps it’s the pleasant way of Stephanie’s writing. All three of these points make this an awesome story.

I loved Scarlett and Julian from the start, but I got really annoyed with Tella, this continues throughout the book. I would say that the way her character is portrayed is one of the only downsides to the book. Fortunately you read a lot more about the aforementioned two people. Scarlett is portrayed really well. During the interview we talked about the fact that her mannerism feels real. She wants something really badly, but the moment she gets the chance to do it, she’s afraid to take the chance. Julian stays a mystery. A quote of The Selection pops into my mind. “Break my heart. Break it a thousand times. It was only ever yours to break.” Love this! Talk about mystery, I hope we get to know more about Legend in the next book, but something tells me this will be alright.

I absolutely adore the covers. My ARC was beautiful with red on the sides, but they made the final version in four different covers. Unless you buy it in a bookstore you don’t know which copy you get. It brings an air of mystery which suits well with Caraval. Not only are the covers pretty, but the dust jackets are as well. I don’t know which one I love best, the American or the UK version.

Unfortunately it’s going to take a while before part two gets here, but I’m definitely going to get it. I wonder what kind of pretty cover it will get this time. Buy the book and enter Caraval, where nothing is as it seems.