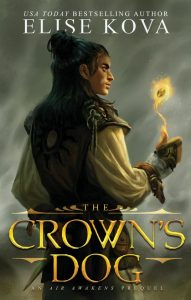 I was so happy when Elise told us about the fact that she was writing prequels to Air Awakens. Unfortunately, not the sequel that I wanted, but still I’d get to read more about this amazing world that she created. Also, more Baldair, Jax and Erion. YES! I was even happier when I received the ARC. She dedicated this book to the Tower Guard, so sweet.

A coastal summer is turned upside down by a violent murder, and a quest for lost pirate treasure turns into a hunt for the killer.

Jax Wendyll is the crown’s dog. As punishment for the unspeakable crimes that tourment him to this day, his life has been conscripted to the Empire Solaris. However, in an Empire afflicted by peace, his duties are relegated to unquestioningly aiding the antics of the youngest prince, Baldair.

Erion Le’Dan, a nobleman’s son, expects a quiet summer visit to the Imperial Palace, his only agenda to visit with his unlikely friends. But Jax’s discovery the legendary pirate Adela Lagmir’s old workroom inspires a hunt for her long lost treasure.

The pursuit of Adela’s truth takes the three men to the Imperial summer manor, built along the old pirate mainstays. When Adela’s trident is branded into a murdered servant, Prince Baldair’s summer amusement of treasure-hunting becomes a hunt to find the killer. But, as mysteries compound, the ghosts of Jax’s past may not be the only things haunting them.

The Crown’s Dog starts a few years before Air Awakens. My heart broke when I read about the brothers interacting with each other. I almost forgot this is where they started before they met Vhalla. A lot has happened in the original series, and I think that I appreciate this book more because of that. You can also read more of their back story, I am extremely happy that she started writing these prequels.

The Baldair you read about here is the Baldair you meet at the beginning of Air Awakens. He is looking for his own place in life. The second brother, the golden boy that lives in the shadow of his older brother, but here he shows his true colours. Jax is an insane person with a small heart. You learn a lot about this back story in the other books, but it was good to see him here. I think it made me understand him more. What he went through, and how people treated him, you learn to appreciate him and not only for his looks. I also really love Erion! He’s the voice of reason for these boys. The noble one that still has something to prove. This story is so them. Looking for the long lost ghost pirate queen, like lost boys looking for a treasure on a map.

Elise switches their pov between Erion and Jax and I think she did this well. Because of the two sides of the story you get more depth from the boys. Normally I don’t really like it, but here it was cleverly done. I wasn’t mad when it switched because it felt natural and no real cliffhangers, thank god.