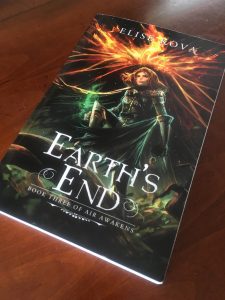 I bought this book together with Fire Falling, but before I could continue I had to read Tales from the Front. I suggest reading that before you start on Earth’s End. It can be a struggle, because you really want (have to) read on after what happened in Fire Falling, but it’s for the good of the story.

At the end of this review you can read about the cover, but it does have some spoilers. If you don’t want to read them just skip this part. The rest of the review is spoiler free.

A woman awoken in air, a soldier forged by fire, a weapon risen from blood.

Vhalla Yarl has made it to the warfront in the North. Forged by blood and fire, she has steeled her heart for the final battle of the Solaris Empire’s conquest. The choices before Vhalla are no longer servitude or freedom, they are servitude or death. The stakes have never been higher as the Emperor maintains his iron grip on her fate, holding everything Vhalla still has left to lose in the balance.

You find Vhalla on the road to Baldair She is the only one who can get to him in time. So much is happening in this part that I felt a little confused at the end. The story gave me hope, and ripped my heart out all within the timespan of 350 pages. These are dangerous books, but they keep getting to me and keep grabbing my attention in a way that I have to read on eventhough I know that some things can work out the way I want them to. I take my hat of to thee Elise.

What I love about Earth’s End is that it explores the ties between the two brothers. You get hint of their relationship in the last two books, but here you get more explanation, more bromance and it is epic!

Vhalla develops into a true opponent. She has a good head on her shoulders and is not afraid to use it. Eventhough this sometimes puts, not only Vhalla but also others, in danger. We got to enjoy a little of Jax in the previous books already, but you get to really know him in Earth’s End. He is a fan favorite and that is not without cause. I love this jokers. Daniel annoyed me a little, but not enough to love this book any less. I could have done without him being like this though. Oftentimes I hate love triangles, and here you get just a tiny bit of it. Who I really started to love was Elicia! On the outside she seems like a bitch, but she will go through fire to help the ones she loves. (Pun unintended) All these characters are amazing.

Elise gave hints about this cover as well:

Now, the symbolism is beginning to get heavy. Vhalla is alone again on the cover, venturing into the wilderness. She’s almost facing the camera, symbolizing how she is growing into her own and becoming a more realized person. In the sky above her is a fire bird. We literally see this formed in the book, but it also is symbolic of a phoenix, rising from its own ashes. I think this works for Vhalla and Aldrik in their own ways through Earth’s End. The cloak she’s wearing is the one she receives from Tim with slash marks. The watch in her hand was gifted to her. And, in her other hand, we see a special sort of magic… Finally, one other note… Carved into a tree that’s on the back of printed books is a symbol – that is actually the symbol of Shaldan!

While Reading this book you will laugh, rejoice, your mouth will fall on the floor, your heart will jump out of your chest and I’m sure that there will be a few tears. Have fun with this book because the worst is yet to come!