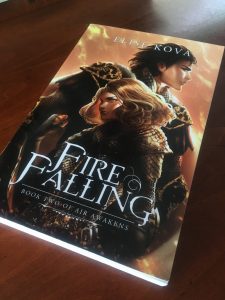 Do you know those books? The ones where you look up and all of the sudden you see that your tears have made puddles on your lap. This book is one of them.

Underneath this review you can read about the cover, but it does have some spoilers. If you don’t want to read them just skip this part. The rest of the review is spoiler free.

Vhalla Yarl marches to war as property of the Solaris Empire. The Emperor counts on her to bring victory, the Senate counts on her death, and the only thing Vhalla can count on is the fight of her life. As she grapples with the ghosts of her past, new challenges in the present threaten to shatter the remnants of her fragile sanity. Will she maintain her humanity? Or will she truly become the Empire’s monster?

One would think that this book would feel like a regular book two, but nothing is less true. Although the entire book is about the road to war, something which I would normally find pretty boring, Elise manages to capture and hold my interest. I read it in one go.

Vhalla doesn’t know anything about war or the travel towards it. Aldrik takes it upon himself to guide her and train her. They do this every day in the presence of their friends. But when an old friend of Aldrik joins the tension runs deep. In the beginning I thought she was interesting but very annoying, this continues throughout this book. You really want to know who she is and what she means to Aldrik. One of the other characters who were interesting in this part was of course the emperor. He is a character we all love to hate. This rings true for Fire Falling as well. He makes sure that there no question about Vhalla’s place in this war and their legion.

Vhalla never ceases to amaze me. What I like about her character is that she is real. She has grown compared to the library girl we meet in Air Awakens, she understands the world more and she is more mature, but at certain points she still has her naivety. She also still needs a congratulatory hug when she’s done something right. She understands that you can be tough, but still very much human. Elise did an amazing job creating a character we, at some point, can all relate to. We feel what she feels and it feels right.

I had a problem with building the world in my mind in the previous book, because there was no map. This has been fixed in Fire Falling. And what a pretty map it is! You now begin to feel what the cost of this war is. You can see it in my Welcome to Solaris post.

What I also really love about this book is the perfect balance between action and character development. There is plenty of action in Fire Falling even though they’re not even close to their destination. You as a reader, along with Vhalla, get to know everyone. Through that you also get a feel of how big the company that they are walking with is. Of course there is enough action because of the training and the fight, but you also get to know the characters I previously thought flat.

The one last thing I really loved was the cover. Elise always puts little hints in the cover. Here’s what she has to say about this one.
Here is the first cover we see our dark prince on. Fire Falling is named after three incidents in the book… When Aldrik falls to his knees before Vhalla in the Crossroads, the Rites of the FALLen in the Crossroads for another, and the end of the book. Since two of the three aspects of the title of the book related to Aldrik it was only natural that he had to be on the cover. In Fire Falling, Aldrik is beginning to function as a guiding force for Vhalla and, on the cover, he’s looking over his shoulder at her. He can’t openly admit to their association. Vhalla’s eyes are glowing orange and she’s alight, immersed in flame. This was done to symbolize their Bond and Joining. That not only can his flames not harm her, but that he is connected on a mental and magical level. She is also wearing the armor Aldrik crafted for her.

All in all, this is a great part 2 of an amazing series! I suggest you buy it and let it take you on a big journey.