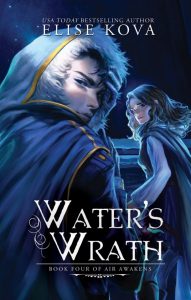 I was really happy when I heard that I would receive an ARC of Water’s Wrath! Because of that, thankfully my wait after Earth’s End wasn’t very long. Every time Elise manages to grab me in such a way that really need the next book asap, and let me tell you, she did it again.

At the end of this review you can read about the cover, but it does have some spoilers. If you don’t want to read them just skip this part. The rest of the review is spoiler free.

The Solaris Empire found victory in the North and, at the cost of her heart and her innocence, Vhalla Yarl has earned her freedom. But the true fight is only beginning as the secret forces that have been lurking in the shadows, tugging at the strings of Vhalla’s fate, finally come to light. Nowhere is safe, and Vhalla must tread carefully or else she’ll fall into the waiting arms of her greatest foe. Or former lover.

After the disastrous ending of last time I was really curious as to what Elise would do and make us feel this time. Vhalla is alone and all she has left is her freedom, until there is not other path then to return to the south and to her prince.

What I really like about Water’s Wrath is that Vhalla is trying to find herself again. First she was a library girl, then a prisoner, after that a soldier and all the while a Wind monster. During all of this she has never had the time to be herself. Even when she was working in the library. This part of her story asks more of her than the whole journey ever has. She has to face her fears and fight her demons, and hope that she makes it out alive. This book also shows us more of our usual suspects. Jax gives us a heart attack, Elicia is annoying but still really sweet, Fritz is the best person you could ever find, and even Larel has her own part in Water’s Wrath (make sure you have tissues). Last but not least, the brothers, Aldrik is Aldrik and he will never really change, but Baldair though… there are no words.

There are a few moments in Water’s Wrath where I was at the edge of my seat, and after the scenes Elise made me want to jump off a fictional cliff. More than once I asked myself the question, Why? The moment you think they have the solution everything starts to hurt. After 3 books I have gotten used to Elise’s way of torturing us, giving us hope and then ripping it away and throwing it on the ground and jumping on it for good measure… Nothing could prepare me for this. Elise takes steps that are not cliche, but where you do think huh, this could have never gone any other way. But still Elise! Really? You had to do that? It still hurts, even though it’s been a while since I read the book.

I think this might be my favorite book up until now. I loved all the books, but this part explains a whole lot and a lot of things fall into place. This really sets the tone for the fifth and final book: Crystal Crowned.

For this book I don’t have Elise’s thoughts for you, but my own before I read the book. It might have some spoilers, if you don’t want to read it just skip ahead.
You see Aldrik and Vhalla together and they have cloaks on, you can assume that they meet and make a trip somewhere. On the back of the book you see crystals. In Air Awakens they talked about the war and the Crystal Caverns. So perhaps they’ll go there. The evidence you get from Earth’s End seems to support this. On the three previous covers you see that Vhalla turns to the camera more and more, even though she is turned to the side she looks straight into the camera. This shows me that she’s no longer afraid, she has found out who she is and accepts that. The last thing I noticed was the weapon that Vhalla carries. It looks like something she picked up in Earth’s End. This all points to an amazing story.

I still suggest you buy all the books. It’s not often that I like every single book in a series, but Elise worked her magic and I can no longer turn away. Next up: Crystal Crowned.